Many relatives of U.S. citizens and/or lawful permanent residents have certain family members and future spouses that they want to sponsor to bring to the United States. Depending on the legal status of the sponsor and the relationship between the sponsor and beneficiary, this will determine many factors including how long the beneficiary will have to wait for an immigrant visa and if they are able to adjust status within the United States or back in their home country.

At Toland Law, LLC, we have been helping our clients legally bring those who mean most to them to the United States for years. In the past, we have been asked many questions about family immigration.

For information on recent changes to immigration law due to COVID-19, read our blog post here.

Here are some of the most common questions we have received:

Can I Bring My Immediate Family To The U.S.?

How Can I Bring My Child Or Sibling To The U.S.?

The immigrant visas for these relatives will not be readily available. in fact, after applying to put the beneficiary in line, these types of relatives will usually have to wait a certain number of years before a visa is available.

If a visa is listed as “current,” that means the visa is available and the person may start consular processing. Almost always, the beneficiary will have to go through the consular process at the U.S. Embassy in their home country. In rare instances that a relative maintains a lawful presence during their stay within the U.S., then the relative may adjust status within the U.S.

How To Gain Residency Through Marriage?

For U.S. citizens that have married a foreign national within the U.S., it may be possible that the beneficiary spouse can adjust their status within the country. Typically, this boils down to whether the spouse entered the U.S. lawfully or unlawfully.

If the spouse entered lawfully, the spouse may file for adjustment of status within the United States assuming there are no other issues of inadmissibility. After filing the appropriate petitions and evidence of the bonafide marriage, an interview will be scheduled at the USCIS (United States Citizenship and Immigration Services) center in the applicant’s jurisdiction.

For U.S. citizens that married a foreign national who is outside the U.S. or entered the country unlawfully, the spouse has to go through consular processing at a U.S. embassy in their home country. The prospective immigrant spouse will have to go through a medical exam, provide a police certificate, among other required documentation to the consular officer.

How To Bring Your Fiancé To America With A K-1 Visa?

As a United States Citizen petitioner, you can sponsor your fiancé and file a petition with the USCIS to request a K-1 visa. It should be noted that you must be a U.S. Citizen and not just a lawful permanent resident.

After filing the petition and providing the required evidence, the USCIS will take about six (6) to nine (9) months to decide on the petition. The petition requires a significant amount of evidence that needs to be submitted to prove the bona fides of the relationship and intent to marry one another within ninety (90) days of entry to the United States.

It is important to submit solid evidence from the very beginning so that you have a higher chance of being approved faster. This is because the USCIS may delay the process and request more evidence if enough evidence is not submitted.

What Happens After Your K-1 Visa Petition Is Approved?

Once the U.S. embassy has the application and required documentation, they will schedule an interview with your fiancé that the U.S. citizen petitioner is not required to attend. Your fiancé will have to provide certain documentation to the U.S. Embassy including a medical examination that was done by a U.S.-approved doctor, a police clearance certificate, and whatever other documents the U.S. Consulate requires.

If all goes well at the interview, the consular officer will approve the K-1 visa application and issue your fiancé the visa which will be attached to their passport.

What Happens After My Fiancé Arrives In The U.S?

After the K-1 visa is approved, your fiancé will have four (4) months from the time their application was approved at the U.S. Embassy to enter the United States. Once your fiancé is in the country, you and your fiancé have to marry each other within ninety (90) days.

After My Fiancé And I Get Married, What Happens Next?

After you and your fiancé marry each other, your new spouse will have to file for adjustment of status with the USCIS to become a lawful permanent resident. While the application is pending, your spouse can concurrently apply for work authorization.

The process from filing to approval may take as long as six (6) to nine (9) months, but your spouse will be able to work while the I-485 is pending once he/she is approved for work authorization. Additionally, your spouse may apply for advance parole to travel back to their home country if the reason for their travel qualifies under USCIS strict provisions.

Once the conditions are removed, your spouse is no longer a “conditional” resident and can enjoy the benefits of lawful permanent residency for the rest of their life or apply for U.S. citizenship once they are eligible. 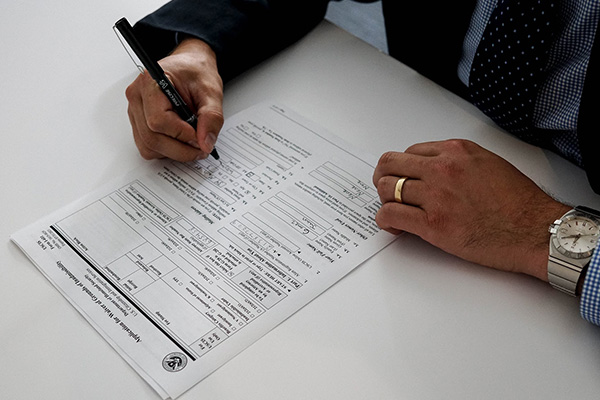 If you are considering bringing your family or fiancé to the United States, you need an experienced lawyer on your side who can guide you through the complicated immigration system. At Toland Law, LLC we have the skills needed to get your family or fiancé to the country in a timely manner.Our accomplished attorneys know that this process can be complex, and we offer professional and comprehensive representation for all of our clients.

To schedule a consultation with Toland Law, LLC and learn more about your legal options, contact our office by phone at (781) 819-3647 or fill out the contact form on our website.